We are in preparations to launch Episode 4 of “They Live Among Us.”

Episode 4 picks up where Episode 3 left off – Ted, a lonely park ranger, encounters a frail young woman atop the Hollywood sign, on the verge of suicide. Being the romantic that he is, he falls in love… only to discover that she is a ghost.

He seeks advice from Buer, who is having troubles of his own, for Lucian and Beliala have risen. Buer’s plan is to return to Elysium through acts of grace; Lucian yearns to take it by force. Beliala longs for Elysium, too… and Buer’s touch.

Caim has returned to his warehouse home, only to discover that Serfina has fled, once again, to the streets. He searches for her, flying above the streets of Los Angeles, and lands nearby. He finds where she lives… and discovers Rocco there.

Soon, we’ll all once again be in this world of fallen angels, suicidal spirits and the humans that they love, all struggling to find grace in the place known as the City of Angels. I look forward to seeing you there. Reach out in the dark; I’ll take your hand, and together we’ll walk through this Paradise Lost.

To see stills of Episodes 1-6, please visit our Pinterest page. And so we may continue to keep bringing you this rich tapestry of gothic supernatural romance, please subscribe to our YouTube channel, where you can also view episodes 1-3.

“The mind’s its own place, and in itself, Can make a heav’n of hell; a hell of heav’n” ~ John Milton, Paradise Lost 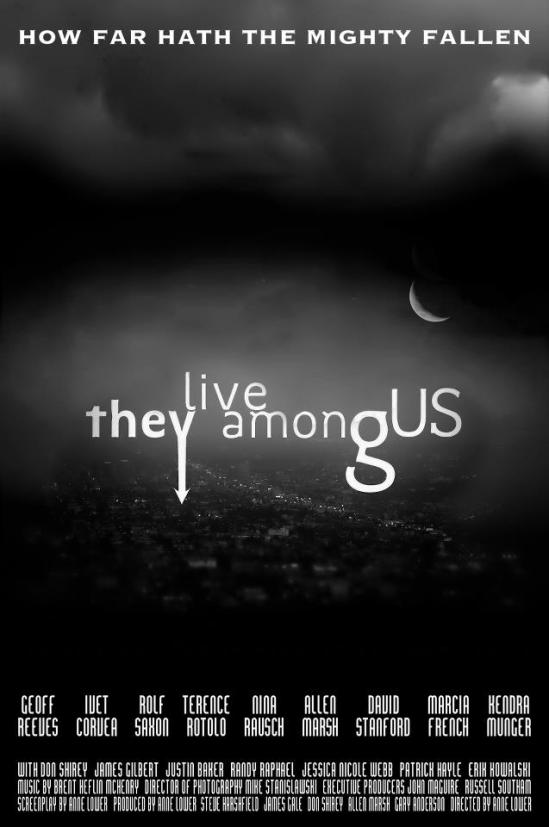 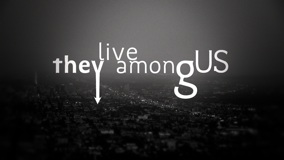 In case you attended last January’s event – or even if you didn’t – this is not-to-be missed. Live interaction with the Creator and the Characters for a 24 hour period. I’ll be Tweeting naked. Jamba will appear. So please, on that date, search and follow the hashtag #ohchat, and prepare yourself for a rip-roaring time.

Below, is our tentative schedule.* Something not listed that you want to see? Leave it in the comments section. We’ll do our best to oblige.

It’s been quiet on the They Live Among Us site… quiet, because I’ve been a busy little Creator.

Episodes 4-6 are wrapped and in the post process. The dailies are lush and gorgeous; the work brimming with love, anguish and rage… I can’t wait for you all to join us as the story continues.

In the meantime, a fundraiser of a new kind is being launched. Inspired by a chance encounter during the shooting of 4 – 6, a t-shirt design has been commissioned and graciously provided to us by David Taylor aka @SciFiCommons.

Ladies and gentlemen of the jury, here it is *drumroll please*: 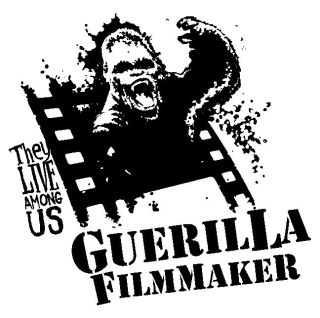 I am hooked on this design; however, I’d love to hear your thoughts in regard to the copy. Below is a little poll I’ve created, to help me make my decision. Please, gentle readers, consider taking a few seconds and completing this poll:

This weekend, once again, I will walk through the streets that pave the dark, fantastical world of “They Live Among Us.”

Lovers will come together; others will be torn apart. There is a heightened sense of danger, of peril. Serafina has left the safety of Caim’s home to return to the only night she knows. Caim is faced with a decision – to let her go, to let her lead this life… or to take the risk of trying to save her – a gamble that could end her life. Buer encounters old acquaintances. Jimmy searches for Beth. A John is in need of comfort for the night. Lives intertwine.

I begin my journey Friday, in a little place known as the Paradise…

The mind is its own place, and in itself,
Can make a heav’n of hell; a hell of heav’n – John Milton, Paradise Lost

I recently sat down with the lovely Nicole Falcone of “Social Hollywood Magazine,” to discuss the ups, the downs and the in-betweens of creating the series, “They Live Among Us.” Enjoy!

Golden Hour approaches. The moment of reckoning, when our IndieGoGo campaign ends. For those just now tuning into this site, my name is Anne Lower. That rhymes with “Flower.”

I am an independent filmmaker living in Los Angeles.

I made the move to indie film b/c I felt myself creatively castrated by the studio system. I was tired of the cookie-cutter approach towards storytelling, and as a female filmmaker, I encountered resistance in others to placing faith in me. So, I decided to make my own project.

I wanted to write about social issues: addiction, violence against women, the sex trade industry, isolation, poverty and corporate greed. And, as a resident of a city where millions live, but few know their neighbors, I decided to create a world of outsiders… I decided the ultimate outsider would be a supernatural being. And so the world of “They Live Among Us” was born.

Part gothic romance, part urban horror and part film noir, TLAU tells the story of supernatural beings –  fallen angels and spirits, and the mortals they love. Set against the backdrop of Los Angeles, it explores a grittier side of the city. The mean streets. Raymond Chandler meets Stephen King, in a place known as the City of Angels.

Going indie means that you have to acquire your own funding. And so, I turned to crowdfunding.

We are trying to raise $600 / per minute for our little dream project. Many films cost close to 1 mil per minute. If you want to see what I can do with little, please watch Ep 1-3, which we made this for 12k combined.

For the next installments, I must improve sound and lighting, and the safety for cast and crew. We have to have insurance… and we have to have permits. LA is a very expensive place to shoot in! But the city is a character in the story – an integral one at that.

I am so grateful to all who have donated! And I am asking others to dig into their sofas, their cars and their pockets. $15 goes a long way!

I am so grateful to be surrounded by such a generous and talented cast and crew. I love them all. Every one.

Going indie means that you have the freedom to come work from the heart – and the soul. And that’s what I’ve done! I even Tweeted non-stop for 72 hours last week – without sleep – to share my dream project with you. And, I tweeted Naked. 🙂

Working on 12k meant we encountered some dangerous situations. Here was 1 night I wrote about for Film Courage. I also blogged about that night, about what it was like to work with such personal content and raw emotion.

Take a look at the articles. Watch the episodes on my site. Listen to my interview on Cutting Room Floor.  For your amusement, take a look at the Tweet-a-thon vids. All made in fun, all for the love of  “They Live Among Us.” And don’t forget to read about my encounter with a possible real-earth angel.

Then, visit our IndieGoGo campaign, and please consider making a donation. By doing so, you’re joining our tribe.

Pledges begin at $1. If, at this point, you don’t want to pledge… I’d like to know why! Email Me . We have had over 12,450 referrals to our campaign. If each of those people pledged $1 we would now be beyond goal… and I’d be blogging about the script, the story and the characters instead of raising money.

Thank you for all of your support of this dream project.

Several people have asked me about crowdfunding. They want to know “What’s in it for me?”

By crowdfunding a project like “They Live Among Us,” you are providing employment for cast and crew – around 30 people. You’re also investing into the local economy, for we must rent locations and equipment, as well as purchase props and wardrobe.

But beyond that, what you are also investing in are the artists themselves. You are investing in their dreams.

Filmmaking is an art form; the ultimate expression of this art is the indie film, for it is created from the heart and the soul, as opposed to being driven by commerce and profit.

Can you imagine a world without art? I cannot. What if there were no music, no dance. What would our world be like without expression? Dismal does not begin to describe it…

Art is an integral part of society. Film brings us together; it connects us through the shared human experience. It teaches us empathy. It reminds us that we are not alone.

Herman Melville once said: “We cannot live for ourselves alone.  Our lives are connected by a thousand invisible threads, and along these sympathetic fibers, our actions run as causes and return to us as results.”

This quote beautifully illustrates the nature – and the impact – of crowdfunding. Strangers, coming together, connected by a common goal – to support the vision of artists. Making the world a better place, one project at a time.

“They Live Among Us” is more than a gothic film noir, a tale of fallen angels and the mortals they love, for it addresses social issues. It speaks about addiction, poverty, isolation and corporate greed, set against the backdrop of Los Angeles. The supernaturals who populate it struggle with very human issues.

Filmmaking is the most collaborative art form around. It takes a village to make a film – and members of the tribe to fund it. Our pledges start as low as $15. One  week’s worth of lattes.

So please, take a look at the episode on our IndieGoGo page, and consider making a donation to TLAU.

Well the Creator has gone and done it. She completed a 72 hour Twitter campaign. Tweeting live, 24 hours a day for three solid days – and then some. The actual hour count? 92.25.

In the meantime, she managed to make a few vids. We want to know your favorite ones.

What is Your Favorite Tweetathon Vid?
(polls)

Today marks the launch of the TLAU / #ohchat Tweeetathon2012.Sponsored by the team at Office Hooky, I will be Tweeting live from @princess_scribe 24 hours a day for the next 3 days. No, I will not be using scheduled Tweets. It will be me, HRH, live and in the flesh.

We’ve a lot of fun planned: Q & A sessions, some games to play, and of course, Naked Tweets every day.

All of this is being done to raise funds for the next 3 Episodes of “They Live Among Us.” The script is locked down; the cast and crew are chomping at the bit. All that’s holding us back is a mere $15k in funding.

So swing on by! To participate, simply follow #ohchat – and be certain to use this hashtag with all of your Tweets directed towards me, so I will know that you are in the session. I’m Princess Scribe, and I’ll be wearing high-heels, a tiara, and a smile.

My Tweets
They Live Among Us
Create a free website or blog at WordPress.com.