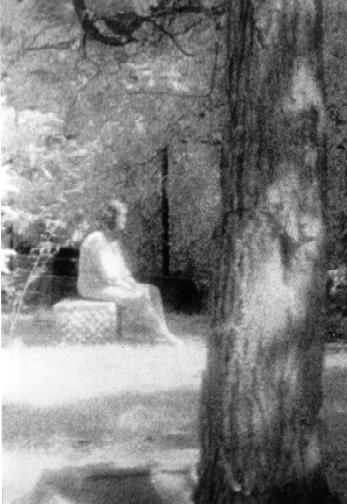 The supernaturals of They Live Among Us are not limited to fallen angels and demons; spirits are also caught in an eternal struggle here. Peg, the tragic muse, doomed to commit her final act over and over again atop the Hollywood sign. Sam, a spirit so obsessed with the Black Dahlia murder that he refuses to journey into the light.

I wonder what it is like for them, to be caught between two worlds. I am certain that Sam knows that he is dead; he remains behind by choice, going over the case page by page, every night, every day, sometimes in his old office, sometimes at his old hangout, the Paradise Bar. For now, he is invisible to all, a mere annoyance to Jimmy as Sam moves his favorite whiskey bottles around, but soon, events will unfold that will propel him into materialization. Soon, Sam will have contact with humans once again.

Peg’s existence is another story, for I am not certain she knows that she is dead. I think that she clings fervently to the hope that this is all a dream, a terrible, dark dream. I wonder what will happen to her, if she discovers the truth – that she is a suicide.

I wonder if Ted will tell her… or, in an act of love, attempt to shield her from the truth. I wonder why, for Ted, she is real. How she is able to materialize for him. How he can see her. Touch her. Comfort her. He eases her pain, and perhaps she does his. I watch as Ted listens to her speak; for him, Peg doth teach the torches to burn bright. Compassion and understanding wash over his face… it is as if he has waited his entire life for this moment. Two lonely souls meet… but can this love story end well? How does one love a ghost?